As I have mentioned before, in gaming terms I am a bit of an old timer. Now, many of you may have heard the saying 'you can't teach an old dog new tricks'. Hopefully by the end of this I will have proven that this is not the case. You can, albeit somewhat slower than the young pups. Don't worry, that is the last time I will use the doggy analogy. As always I will attempt to make my point in an amusing way while actually trying to impart some od what I have learned about playing Lords Mobile.

A few KvK's back I was attempting to get points and raise my kill tally by hitting turfs in our rival Kingdom, then promptly random relocating. Obviously when I relocated by battle fury was still active so I had no shield. Rather stupidly, with hindsight that is, I relocated without switching to map view. I relocated right next to a burning hive. Before I realised what was happening – old-timer's slow reactions – I had lost most of my troops, not to mention the might that they had brought me.

Ther Lesson: If you have no shield active always random relocate with the game in map view.

That brings me nicely to my next point and will include a brief explanation as to why I paid a heavy price for my error detailed above. Having plenty of high level infirmaries is more important than having loads of barracks. having many barracks does mean you can train loads of troops in one go, but it takes an age to train them and requires loads of resources. Without the infirmaries if – no, when – you get burned you can't heal your troops and thus they get killed. I now have one barracks and enough infirmaries to heal my biggest army if it all goes wrong. 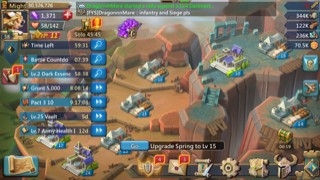 I have included a screenshot of some of my imfirmaries so that you know I am not making all this up.

The third of my lessons is the simplest, yet still one I had to learn the hard way. Don't waste all of your gems and speed-ups trying to complete a Hell Event unless you are absolutely sure you can actually complete it.

MY next point had amusing rather than regretful consequences for me. Always ensure that you are in guild chat and not world chat before launching into a rant about another guild or player. Thankfully when I posted a rather sarcastic comment about a player who had been targeting the smaller players in our guild it started a war of words (well, it is a war game) between two players with almost identicle names. When I realised what I had done I told my guild-mates. I don't know about them but I sat reading the fallout without commenting further, kind of relieved to have mean left out of it. Who says gaming can't be fun.

I am going to finish with a warning for you all and a piece of useful advice for chatting in a multi-national game. My warning is this: Don't play Lords (or any game involving guilds or their equivalent) when you are drunk. Sending one grunt to a guild-mates fake rally on a level five Darknest (which seems hilarious when you are drunk) is not going to be recieved with the same humour you felt when you did it. And the wrath of your guild leader may become upon you. Thankfully all of this occurred to me just as I was about to click the join button. It was whilst drunk that I learned the earlier lesson about Hell Events.

I am going to finish with a simple piece of advice. When writing Emails or in chat always use proper English (or your own language obviously). Abbreviations and slang word may confuse the translator and could lead to confusion or even offending someone.