Once killed, the Darknest gives out essence which you can transmute in the transmutation lab to obtain rewards (gems, resources, speed ups etc). The prizes you get really depends on the colour of the essence and not necessarily on the essence level. As you’ve noticed, there is 5 levels of darknest each containing a specific essence. Each essence has a level from 1 to 25. 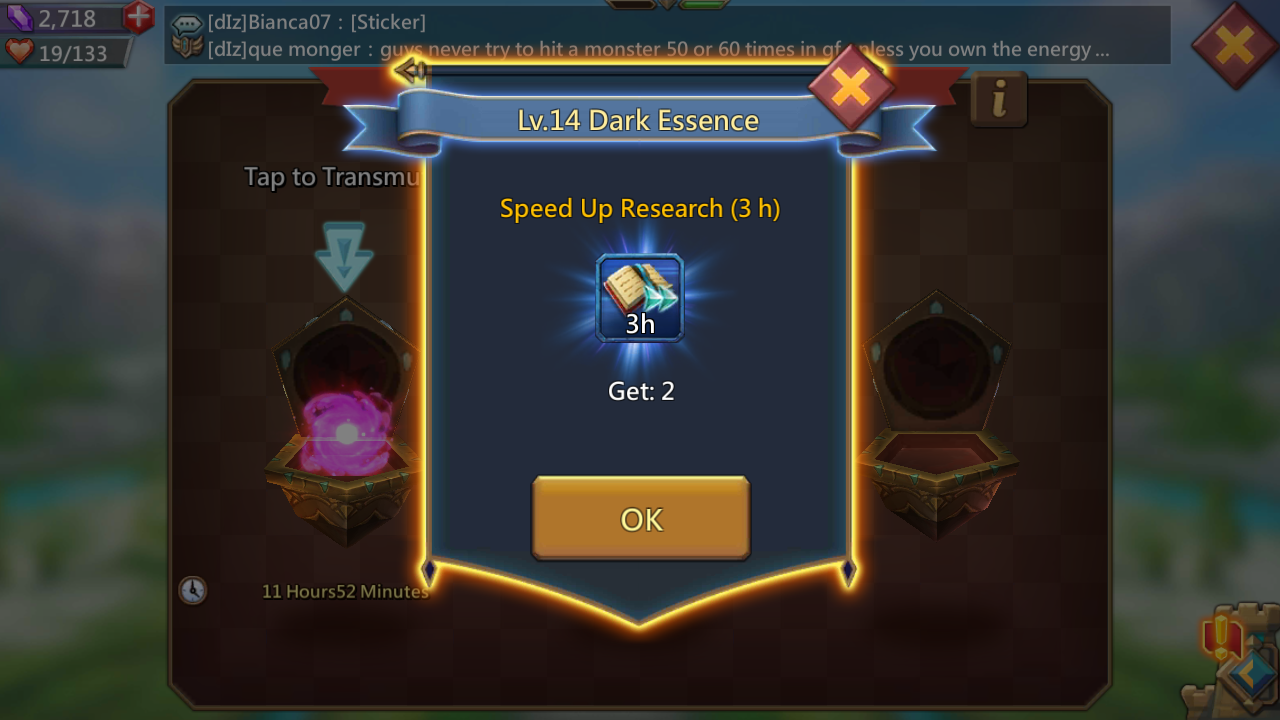 First of all, I would highly recommend you to spend some time researching Intelligence Report because you need to know very well what you’re dealing with. As always, keep researching your Military tree to get your troops as strong as possible and also, the Military Command is really helpful (Invasion will increase your troop size that you can send to a nest, Convention raises the Darknest Coalition Travel Speed which gives everyone the boost travelling with you and Navigation increases travel speed for the Rally host which speeds up the entire rally going to the nest, but only the host with the research on the way back).

Step 1:
Scout! The difficulty of rallying a darknest is positive correlated with the lvl of Dark Essence.

Indeed, there are no losses when you hit them whether you win the fight or you lose it. There is only a small amount of wounded involve, but not dead troops. So, don’t be afraid to take part in those rallies.
To be able to hit a darknest, there must be at least 2 players, if not the rally will be automatically cancelled.


If you look at the barracks the top right corner there’s triangle that tells you what troops do well against others. 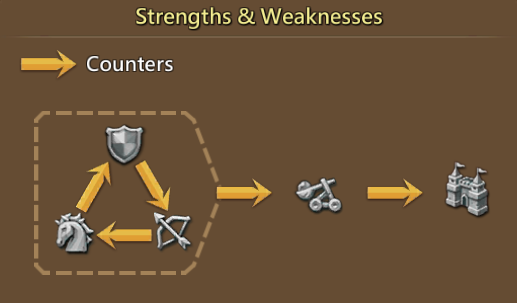 e.g.1: If a Darknest only has Sharpshooters (Ranged), then you can just send Infantry (Gladiator, Royal Guard) and you don’t need any other types of troops
e.g. 2: If a Darknest has 300k Infantry and 800k Ranged you will send full Infantry to counter their soldiers. 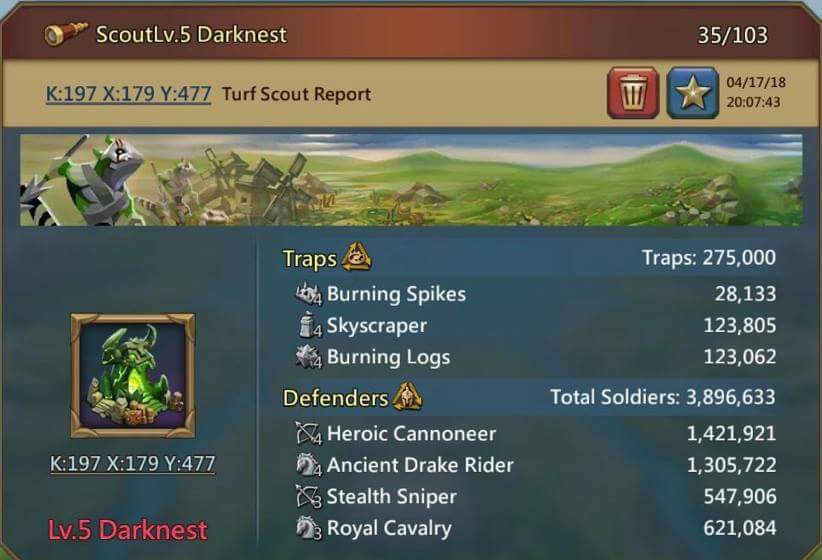 If there are 2 troop types, and the number of one type of troops is heavier than the other one, the deployment is similar to a single troop type. 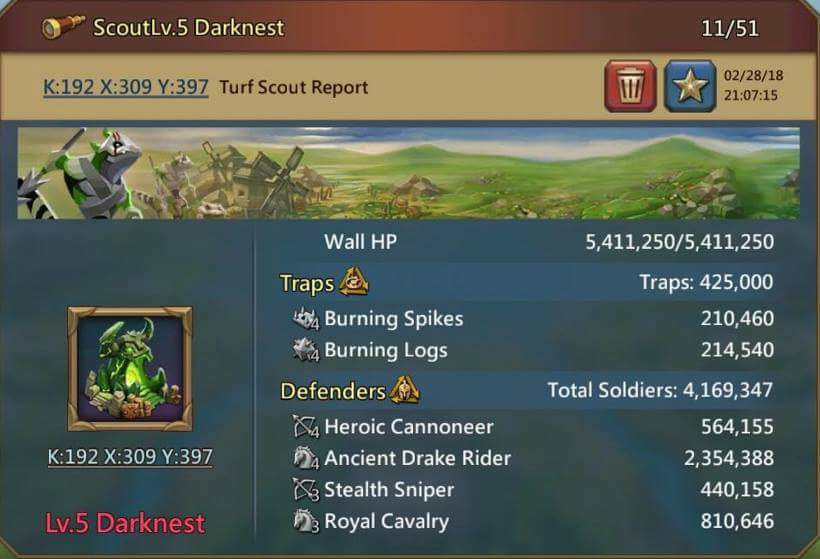 SIEGE ENGINES are there to help break the wall and can be countered by all troops.

Step 4:
Deploy the right HEROES
Always send heroes that give boosts to the troops you’re sending. If the leader is deployed, all the green stats apply.
So, if you have Infantry and Ranged – send 2 Infantry heroes, 2 Ranged heroes and as we normally send Siege to darknests, send 1 Siege hero. Your heroes will increase the number of troops you can send as well. So, assign them first before assigning your troops.

*Note: If you are sending Goblin or Rose Knight (for their army atk buff) but the troops you are sending is not cavalry or ranged, just send 1 troop in order for their abilities to work. If there are none, the heroes will remain in the background and won't use their special abilities.

Step 4:
GEAR
Be sure to match the gear you are wearing to the troop types and it always depend on your main troops. 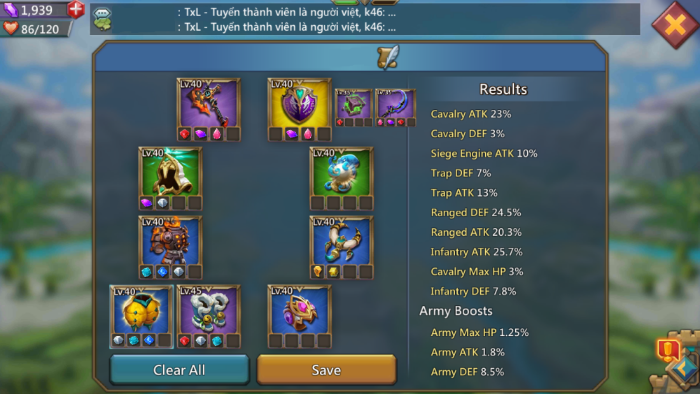 Step 6:
ARMY LINEUP
Once the wall is breached, the troops of both sides starts to fight against each other, the fastest troops will be the frontline to tank the damage.

e.g. 1: If the darknest has Infantry, you have to use Cavalry Phalanx to counter back.
e.g. 2: If you use a Ranged lineup; ranged and cavalry to hit the wall. Once the wall is breached, your lineup will change to a Cavalry lineup. And if your battle relies on Ranged lineup, you will suffer severe loss.

Step 7:
Use an ARMY ATK BOOST

Ever wonder about the various heroes you see when scouting a darknest? Well here’s a guide to show what troop type they’re strong in! Definetly helpful if you’re the rally lead so you know what are you going up against. 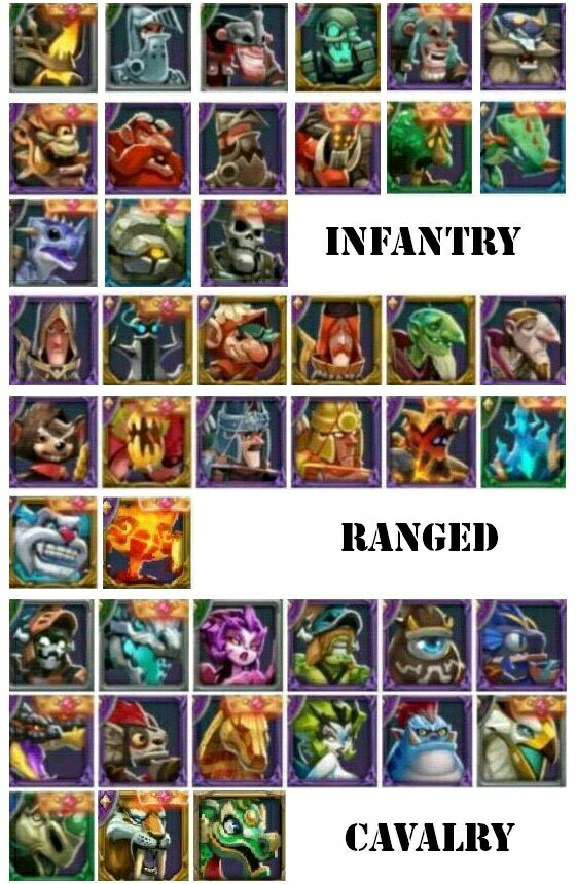 *Only rally the Darknest that you are able to attack with one troop type. As the wall of the Darknest is too tough and multi types of troops will cause unpredictable Lineup change.

1-Rallying with 100% Range negates the wall of the darkness. This means that the darkness troops, except it’s range, will run out from behind the wall.
2-Rallying with all Range and 1 of each other troop type is very effective against darkness with Calvary and Range mixed troops. The one extra troops are very important because they stall the darkness troops for about 5 seconds allowing your archers to deal more damage.
3-Rallying a darkness that has all Range or mostly range: Send 50-100k Destroyers because the wall will hold your troops back allowing the Ranged darkness troops to deal about 10-20% of your morale before your Infantry reached them.
4- Rallying a darkness that has Cavalry and Range inside, higher lvl essence. Send 100% Range and attack in Infantry Phalanx this way your Range troops will hit the darkness Cavalry troops instead of the darkness Range no matter the darkness formation.
5- Rallying a darkness with Cavalry and Infantry can actually be done with All Range and 1 of each other troop type in Infantry Phalanx. As long as the darkness formation is not in Cavalry wedge or Ranged formation you will hit the Cavs first.
6- The higher lvl the essence is the stronger the troops inside the darkness it are. Darkness 23+ generally have their stats (attack, defense, HP) multiplied by 1.3-1.6 depending on the essence lvl.
7- Any stats boost for yourself that would work against another player will also work for you in Rallying darkness, such as gaining battle fury for extra attack/defense/HP boosts, using attack/defense boosts, holding a prisoner, or having an active altar boost.
8- Some darkness are simply trial and error, meaning you have to figure out the darkness frontline troop before being able to counter it and for amore easy win.

1-Don’t ever rally a darkness than has 3 troops types it is near impossible to win unless you are a max stat player.
2-Stick to attacking with all Range, Calvary, Or Infantry (only one troop type) sending 2 or more troop types greatly decreases your damage output and is advised against unless you have max stats.
3-Using defense boosts for darkness with all Range in them is more effective than if you used an attack boost in most cases. This is because the all Range darkness will get 3-5 shots off on your troops which can easily drop your morale by 20% (combine the defense stat with 50-100k Destroyers for maximum effectiveness).
4-Using attack boosts are extremely effective when you are rallying with all Range or Calvary. Also entering battle furry will give you an extra attack boost as well.