As observed in the game, there are lots of guild which are abandoned, member down or worst inactive. Here are some guides on how you run a guild smoothly and successfully.

When we say successful guild, this is where all members are having fun and enjoying the stay with it, no matter how strong or how high the overall might a certain guild is.

This is the most important thing in a guild, it is to avoid any conflicts and troubles againts other guild and keep your guild organized and run smoothly. ( Main rules are commonly seen in the guild board as shown below. ) 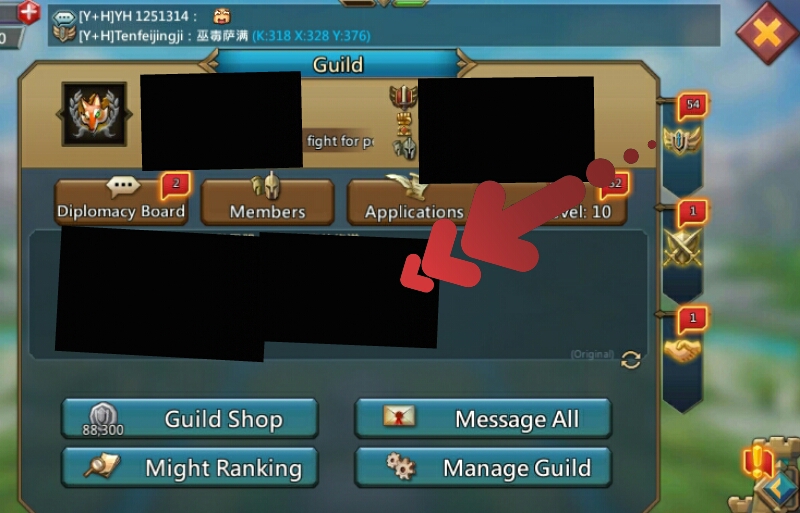 This are how i rank my members on my own guild.

RANK 5 or the Guild Leader – The one who inforces the rule and organize the guild. Has the power to kick doutchy members and is resposnsible for the guild. Could be your best friend or worst enemy inside the guild.

Rank 4 (R4) – This are the most trustworthy and loyal members of the guild, they are the one helping the guild leader inforcing the rule and organizing the guild. They also has the power to kick a member with the permission of the guild leader so must be obeyed. (Note: Never take an R4 which is unrespectful and make decisions by himself/herself.)

Rank 2 and 3 (R2/R3) – This are the members who contributed to the guild and actively participating in events and guild activity. Ofcourse, R3 do more than R2. They can send message to all members same as the R4 and R5.(Note: Always evaluate members on this rank base on what they contributed and how they cooperate with the guild.)

Rank 1 (R1) – The lowest rank, commonly new members of the guild and are under probitionary. They can always be ranked up depending on how they cooperate with the guild and how active they are. (Note: Must be observed for they are the main cause of troubles and conflicts againts other guild.)

Every rank has its own role and participation in the guild, you must collect datas and information of your members to control them and avoid any problems inside and outside the guild. Its is also important to keep in touch with your members with the use of apps like WeGamers and other communication apps.

It is important to include mail in the rules of the guild, one doutchy mail could burn the entire guild which you don't want to happen. You can use mail to remind your guild members to shield up, shelter their troops, information about the upcoming events, making an alliance with other guild etc.

Use the CHATBOX located at the upper part of the screen for your guild chat or global chat.

Use the DIPLOMACY BOARD for diplomatic conversation with other guilds. It is also good for you to have other way of communication by the use of another app to make it easy for you to monitor the activities of the guild. 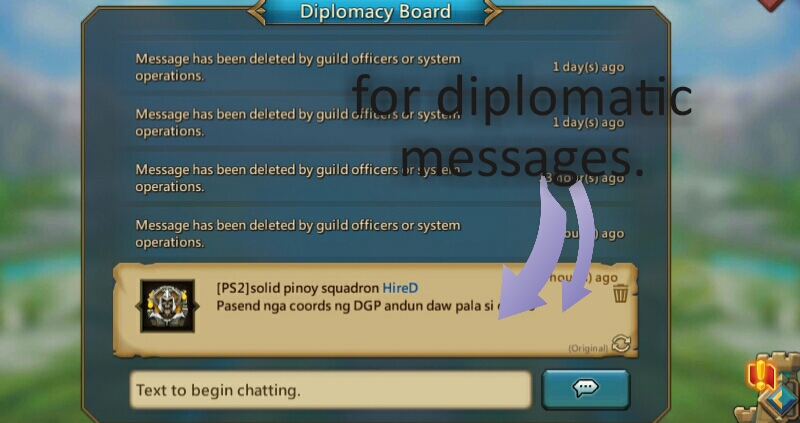 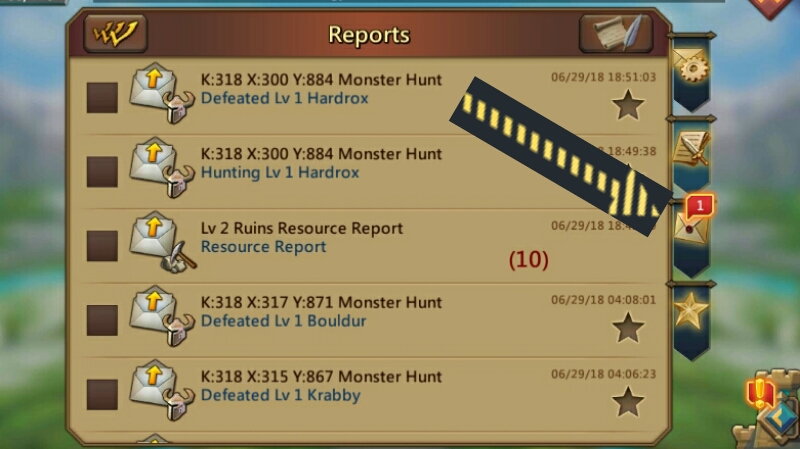 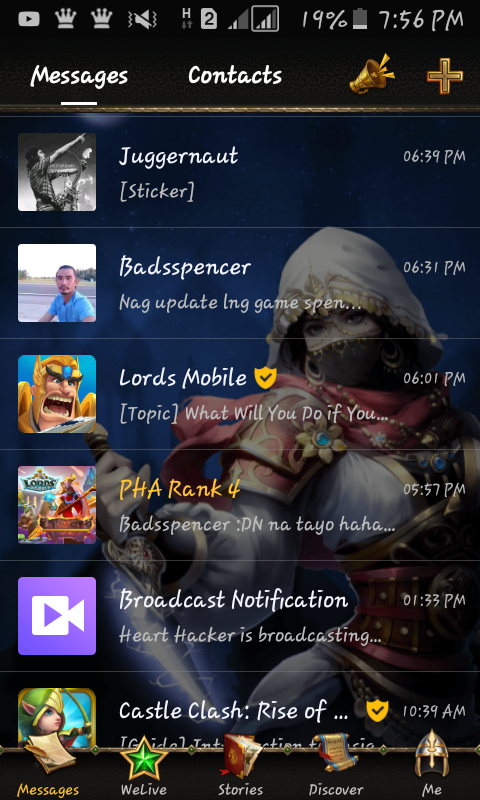 As a Guild Leader, it is important fot you to know where to hive your guild, but for thise smaller guilds or starting guilds i don't recommend you to hive for it will attack other guilds to burn you and take all of what you have. 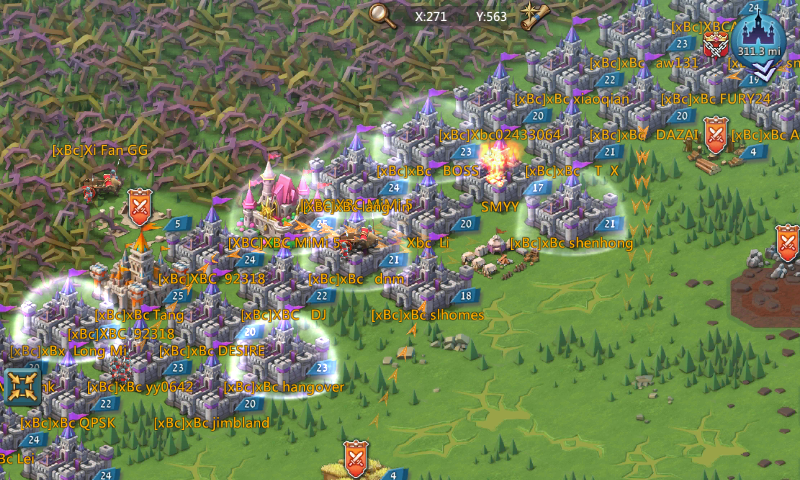 I recommend only to hive near your allied guild's hive are on the guild protecting you. For higher might guild, always use the resources level map in choosing location for your hive, the higher the level, the more competitive gathering resources. (Note: Keep your Guild Banks the center of your hive.)

Having a huge number of members in a guild will benifit you in terms of helping each others specially in guild fest, guild gala, guild showdown and other guild events.

Now, how are you going to gain more members? Just simply build a reputation in your guild through requirements. This will help you filter those active, trustworthy and loyal members that will help your guild through out the game.  Some of the guilds are making their guild public to gain more members but i dont recommend it though.(Note: Just always aim for the fun and enjoyment of your members inside the guild to attract more players and join your guild.) 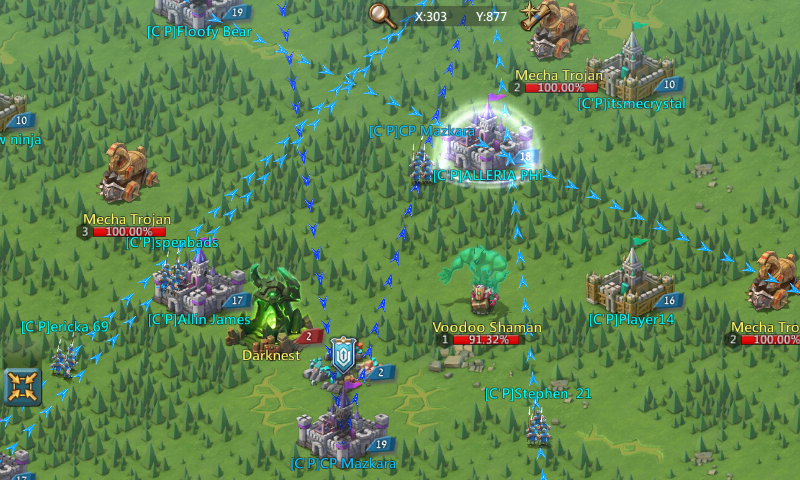 After all, this is just a game to have fun and enjoy but ruining other players aren't the best for you to make the best guild on your kingdom.

Hope this Guide and Tips helps your guild achieve your goals.

One thought on “Guide and Tips on Ruling a Guild”