It is normally customary to introduce oneself when reaching out to a new audience. Hello there! I'm Vicente Mena, PFC (Hopefully I get promoted soon) Mena in the US Army. Like most of us here I enjoy a good game when I find it. I like penguins, the outdoors and food. Food is life! I like to share personal experiences through my writing. Right now I just happen to be passionate about food!

So right now I'm playing Lords Mobile, great game, it keeps me engaged in a good way… until my hero gets captured and then I want to burn the kingdom down and everyone in it. Like most of us who do play this game, I am also sure this is not your firsts RTS defend your castle style game you have played. Which brings me to my current train of thought. NO! Not the fact that I didn't go to the DFAC for lunch. A DFAC is what we call a cafeteria basically. But it is food related. I hate hate hate hate hate hate! The food system in Lords Mobile.

Don't get me wrong it works. I just don't like it. Why can't my troops stay out of my vault? The vault protects food from invaders but not from my own troops? Doesn't sound very vault like to me. I fed you already! Why are you still hungry! HAHA! I'm glad my leadership doesn't think like that most of the time. Or I would have only had one meal since I enlisted over a year ago, with the occasional MRE raid when someone forgot to put them away. Oh, what a life that would be. I do like saying, "Food is for training not eating!" Every time I see my food blink red because I'm trying to train new troops… Here I thought I trained my troops better than that. But no, they go into the freaking vault and start eating the food whenever it's not in the bag.

Oh yeah! How is a bag more secure than a vault? It's a BAG! Maybe I should replace my vault with a bag that way I always have resources. There's another game I used to play like this, way cheaper too. Where whatever the vault held the troops would not eat it. Now those were some disciplined soldiers. I wonder what rank they are? Maybe that's the problem? They think they can do whatever they want because they are of high rank. They respect the bag though, I'll give them that. Or maybe we can just say I was spoiled by my last game where the vault was a sacred thing, not something that was at your disposal. Yes, the food we have in the supply closet can be taken if your hungry just don't open that bag over there that clearly has all the food our heart could ever desire.

At least they stick around, think about it. They have no self-control over our vaults but they are loyal beyond a doubt. I personally hate when they try to have me work but won't let me eat. I get grumpy. I don't think that I would be super excited to go to war if my last meal was when I first enlisted. All jokes aside I do wonder why our vault doesn't protect our food from our troops. Some food for thought. 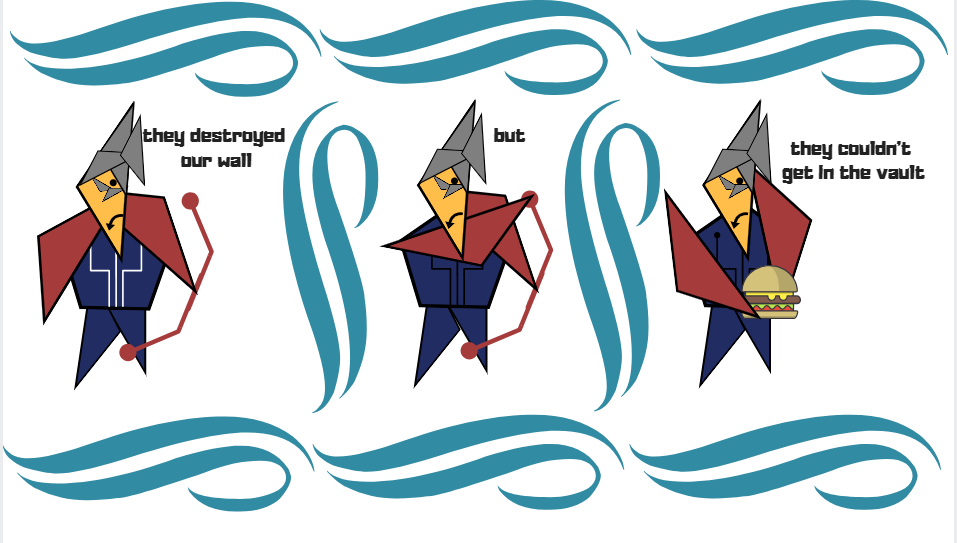