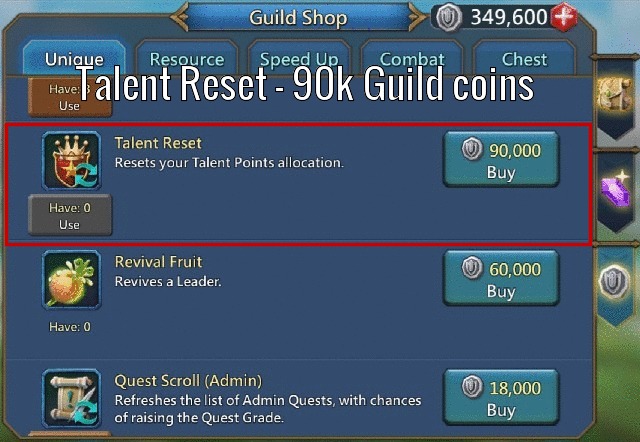 Equip your hero in war gear. You will want to make sure you are equipping your hero in attack gear. You can equip gear that helps strengthen your strongest troop type. If you’re not sure what your strongest troop type is you can check that on your game profile (see images below to know how to check it). Since we just finished guild fest, I suggest forging the best ATK gear for your preferred troop type between now and the next guild showdown. It’s also good to have that gear for attacking other castles and darknests. Good gear is always a good idea, guild showdown or not. 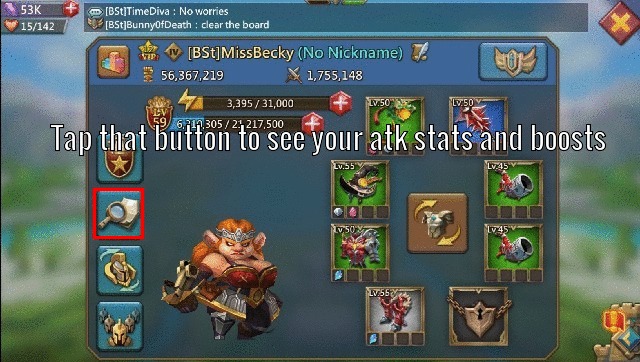 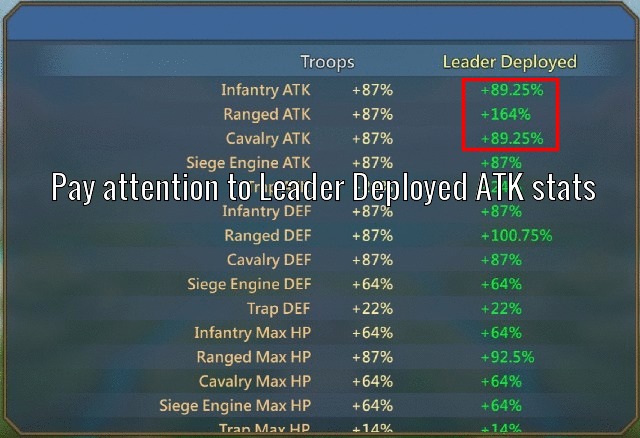 As you can see my best troop type, with my current war talents, are my ranged troops. Therefore, I would pick the gear that helps boost my range ATK. I like my cavalry as well, so even though I could go either way with infantry or cavalry, I have better cavalry gear. For guild showdown, I decided to use the gear that would boost my range and cavalry ATK. (ignore my gear above, I was hunting monsters when I took that screenshot haha!)

Activate an attack boost. If you have an attack boost, activate it before you select your lineup. If you don’t have one, and you don’t have gems, this is another thing you can buy with guild coins. If all you have is a 4-hour attack boost, that’s fine, as long as it doesn’t take you more than four hours to submit your lineup. If you have holy stars, I frequently get attack boosts from the labyrinth. You can also get them in your guild fest gifts, occasionally guild gifts, and VIP gifts. This is a good thing to make sure you save one for guild showdown. 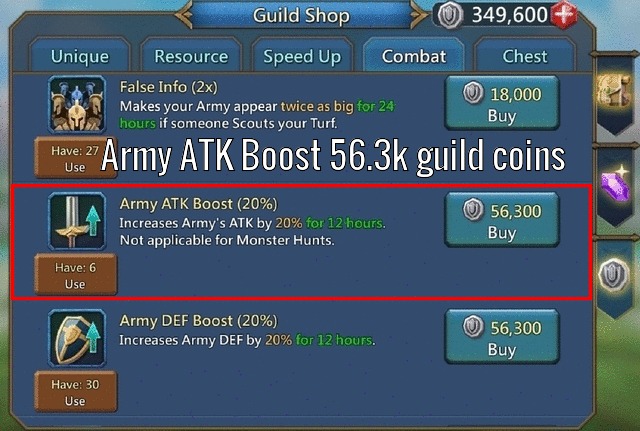 Switch your leader. Before you start picking your heroes and troops for guild showdown, make sure that one of the heroes you’re going to use is your current leader. If you don’t send your leader, you don’t get any of those green boosts for your attack stats. So, it’s really important to make sure your leader gets added to your guild showdown lineup.

Picking a good lineup starts with your heroes.  Before you pick your troops, you need to start with heroes first. They are probably most important to your lineup because they determine not only which troops you send, but also how many. And this is probably the trickiest part. To begin with, this is purely army vs. army, therefore siege is useless and you shouldn’t send any siege or siege heroes (prima, incinerator). You should pick your heroes based on the troop types you want to send. So if range troops are your best/preferred type, then you will likely want to have a few ranged heroes (but not trickster, he offers no boosts to help your army). Or, if you have enough ranged troops to only send range, then send all ranged heroes.

Rank and color matter, so make sure you are sending your highest color/rank heroes. The rank determines how many troops you can send with that hero, and the color determines how strong the boosts are. I usually go color first, and then rank when picking heroes because I want my troops to be as strong as possible. Also, go through your heroes and take a look at their battle skills on their skill tabs. Find out what boosts each hero provides so you know which heroes will benefit your army the most.

And, do not forget to send your leader!!

Time to select your troops! Okay, there is a little bit of math that you have to do on this part. The troops you select completely depend on the heroes you selected. Each hero accounts for 20% of your army. So, in the picture below, you can see that I sent three ranged heroes and two cavalry heroes. I can send a total of 351k troops, and when I was finally picking my lineup I didn’t bother with a calculator or anything, I just kind of eyeballed it. But now that I am doing the math, I sent about 16k too many ranged, which isn’t too much of a difference to really make or break my line up. I was pretty close. If you are trying to send mixed troops, I would suggest sending two heroes each that match your two preferred troop types, and one hero in your weakest troop type. So 40% of your troops would be your preferred troops, 20% would be your weakest troops, and 40% for the middle. And another reminder, DO NOT SEND SIEGE. If you don’t have enough troops to fill up your line up, work on building up your troop count in the meantime. Just make sure you’re sheltering“>sheltering them properly so they don’t die before the next guild showdown. 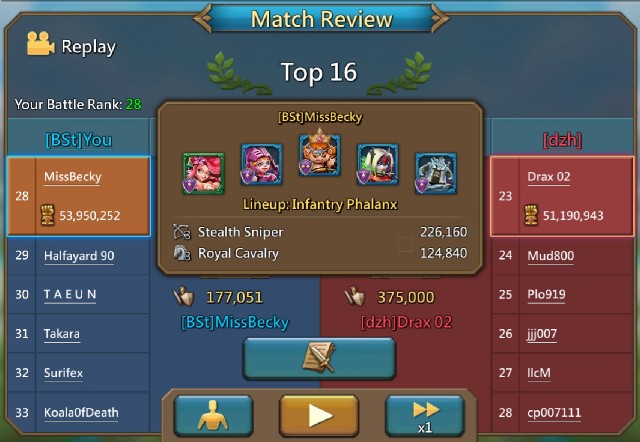 Don’t forget your army formation. Now that you have a good idea of what heroes and troops you’re going to send, make sure you have an army formation that will best suit the troops your sending. For my line up I sent a lot of range, and some cavalry. I sent them with an infantry phalanx so that my cavalry was in front of my range. Since infantry counters range, and cavalry counters infantry, I wanted to make sure to get my cavalry in front of my range to take out any infantry so that my range wouldn't get killed. Range troops are my strongest troop type, and cavalry is my next strongest. Or rather their my preferred troop types. So I wanted a phalanx that would keep my range going as long as possible because I set my talents and my gear to boost my range troops. You want to think about your strongest troops, and which army formation keeps them safest.

And what if you do all that, but still don’t do as well as you’d hoped? If you’ve done all of this, but you’re still not happy with the results, then my suggestion is to focus on your military research. I have all of my military research up to level nine, so my troops do alright. You can also work on training more troops, or upgrading your attack gear. The goal is to always do better than you did before. Even a little progress is still progress.

I’m not a super high might player, by any means, but I usually do pretty well in guild showdown (as long as I haven’t just been zeroed right before it). I tied in my guild for knocking out the most number of people in the guild we were up against. But if you follow these steps, then you are doing the best you can do. If you haven’t been doing these things, work on doing them next time so that you can help your guild do their best. If, like me, you are bothered when people don’t seem to be able to keep track of everything they should do for guild showdown, go ahead and share this with your guild. And if there are other tips that I may have neglected to include, please let me know in the comments.