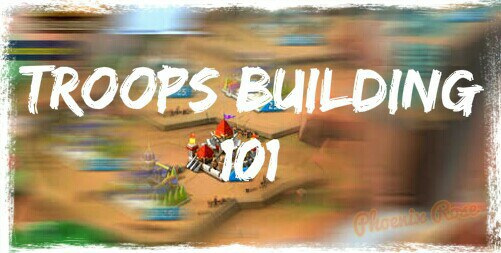 Hello! I’m here again with a new post that will discuss

a frequently asked question from my readers: “What type & how much troops I should make?”

I will discuss this based on my experiences as well as what I have learned from some others pro-players that have been playing this game longer than me.

How you build your troops should depend on two things:

1. How far you’ve gotten in research

there are a few big do’s and don’ts

This means you don’t really have the gear to be a big rally lead and most of your troops are going to be spent either solo hitting or filling your rally leader’s rallies. For this you’re going to want a combination of t3 and t4 troops.

but that’s a whole other conversation for another time. Even if you’re mostly a solo hitter, you should still have at least one full march of every type of troop.

If you’re mainly solo hitting, you’re going to be relying mostly on two types of troops for your hits. People do this because it makes gear easier and your hits more effective,

By keeping at least some of each troop, you’re a more versatile player and can take different kinds of hits more effectively.

There are two reasons to have all three. The first is that you’ll need to use the third type to join rallies and darknests, and the second is that two type castles are pretty easily counterable.

**Very important: Most solo traps cannot and should not take rallies**

The thing that differentiates a trap from a normal account is that “traps” keep their might low by only focusing on essential things (no extra resource buildings, no research, no accepting turf quests, no extra heroes, etc) and instead build massive amounts of troops.

There’s no exact answer to this, BUT there are definitely successful trap builds out there. Solo traps usually rely on a combination of T1 and T3 troops. T1 frontline traps are possible to run effectively, but T3 frontline T1 backline troops are much more popular because they can be reinforced by guildmates. For example: your guildmate would reinforce T3 infantry and your T1 range would do damage while the T3 took damage.

Rally traps are a completely other level of gameplay and require a lot more money invested into gear, heroes, and troops. It is really extremely hard to build a rally trap without spending a lot of money and I wouldn’t recommend trying to become one unless you’re prepared to do that. The current rally trap relies on even numbers of T2 and T4, occasionally with some T3 mixed in. Rally traps aim to have upwards of 18 milliion troops at any given time. **Very important. You NEVER want to take a rally with T1 in your front line.**

**Key Point: Troops in squads line up in tier order.**

you have four squads created per troop type. That means anytime you have more than four troops of any type, you’ll have four “squads.” Each squad forms a square and the troops you have of that type are divided up evenly amongst your four squads.

In this example, the T1 will be standing in front of the T3 on the battlefield and they will be taking damage first! Troops always line up in tier order within their squads so in a phalanx you will always see your lower tier troops taking damage before your higher tier troops.

In the example above, if I asked for T3 infantry reinforcements, they would not be taking damage until all of my T1 died first, so I’ve essentially signed my low tier troops up to die. We don’t want that to happen, that is why rally traps don’t ever build T1.

That’s why backline troops are really important! Most people understand that ranged troops are constantly firing in combat, but they don’t realize that’s true for every type of troop. Even if you’re running ranged phalanx, your infantry and cavalry troops will still be engaging the enemy in combat- they don’t wait till your ranged die, they run up and start hitting the enemy frontline right away! (mythbuster- you can totally defend in ranged phalanx if you have the right troops to do it)

This doesn’t always mean that you want to counter the phalanx of your opponent. While circumnstantially that does happen, the most important thing to keep in mind when you’re hitting someone is “Which of my troops do I want taking the damage?”

If we remember that all of our enemies troops are constantly dealing damage in battle, it doesn’t always make sense to send a cav blast at someone in infantry phalanx if they have millions of ranged in their castle. If I’m attacking a ranged heavy with infantry frontline castle, I’m actually going to use an infantry blast, because my infantry will take the least damage from the largest group of my enemies troops (in this case, infantry).

What about meat shielding in attacks?

When you sustain losses attacking in combat, 60% can go to hospitals while 40% are red dead. The “safest” meat shield is to send 60% t4 and 40% T3 in every march, but as you can imagine, that’s going to significantly lower your damage output.

Alright! That is all for now. If you have any question or suggestion, feel free to out with it. And don’t forget to share this post with your friends! (smile/)