I wish I had listened to the sage advice of an old t4 player that used to be in our guild (RIP Sean’s accounts) when he told me to wait as long as I possibly could before I upgraded my castle to level 25. I didn’t rush c25 (castle level 25), by any stretch of the imagination. When I went to c25 I felt like I really needed to in order for my strategy for the game to work (it didn’t). Now, I wish I had waited a bit longer. I didn’t know what all I was in for when I went ahead and made the plunge into castle level 25. So I want to give everyone considering going for c25 a better picture of what all that entails, and make the case for why you should wait and do as much building and research as you can before you upgrade to level 25.

Holy resources Batman! The thing that surprised me the most was how much rss everything takes to build to level 25. Once you get to castle level 24, you’ll see what I mean. Just to make the upgrade for c25, I had to really work to build up the rss I had in packs. Now, none of the buildings take THAT much rss, but they do take a lot. 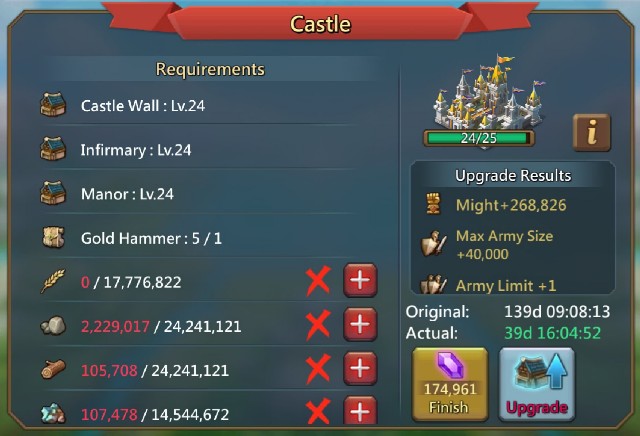 The crazy c25 upgrade! So much rss! But that fifth army though… 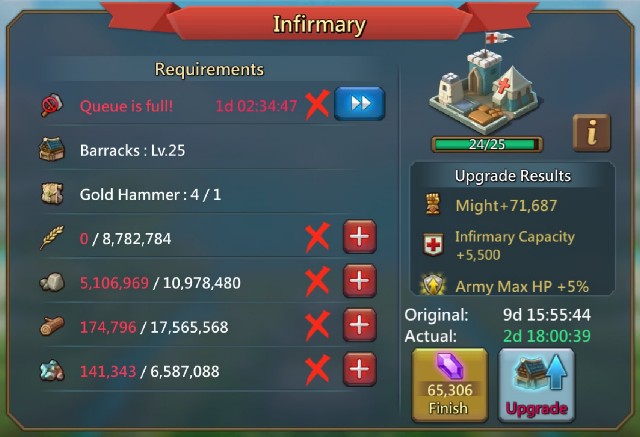 This was infirmary 25 upgrade. All those resources!! But those 5500 extra beds and 5% army max HP though… 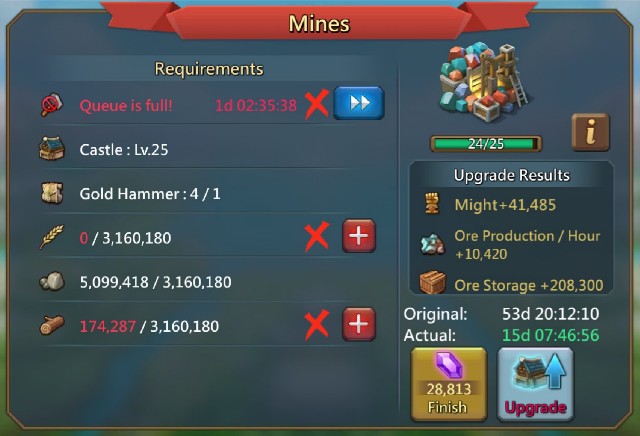 Hell Events are so much more hellish. The points it takes to get to level three hell event, are higher than they were when I was still just c24. And not just hell events either, but my KVK solo war level three took a lot more than it used to as well. I used to only need around 7 or 800k points for KVK solo war 3, now I need over a million points. Below is a screenshot of a hell event, and it takes 660k points.This is proving to be the regular amount of points. I used to only take hell events that were under 400k points, but those are long gone now that I’m c25. 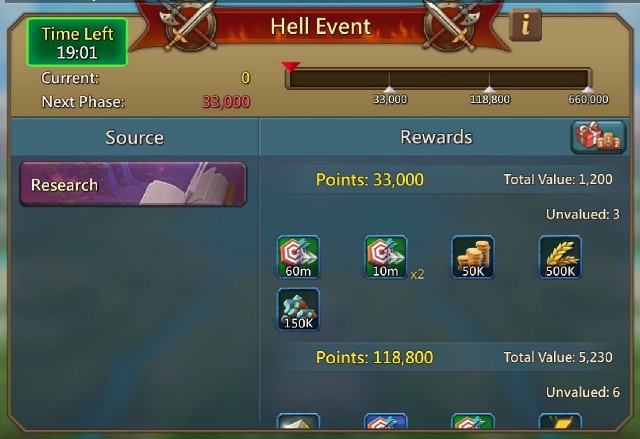 Academy Level 25 is a beast all in itself. If none of that seemed like a good enough reason to hold off on your level 25 dreams, this might. If you’re already c24, with level 24 buildings, then you already know what all is required for level 25 academy, but it’s total crazy town. 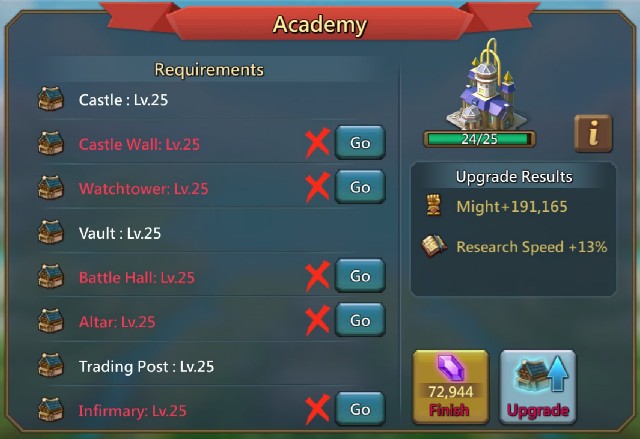 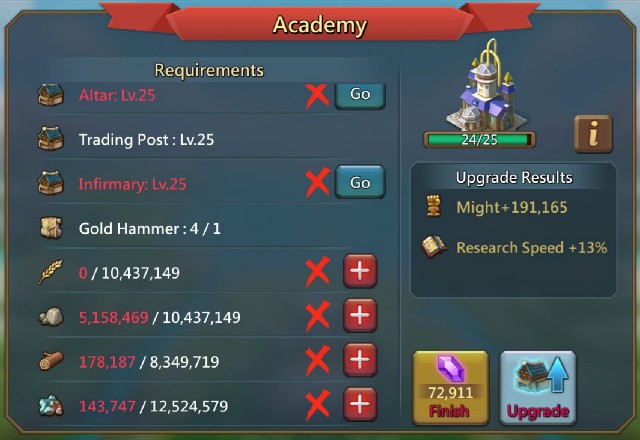 Update: I actually have infirmary 25 and watchtower 25 done now haha! But yeah, All of those buildings need to be done first. And I don’t even know how long that will take because I’m nowhere near having them all upgraded. Which reminds me… 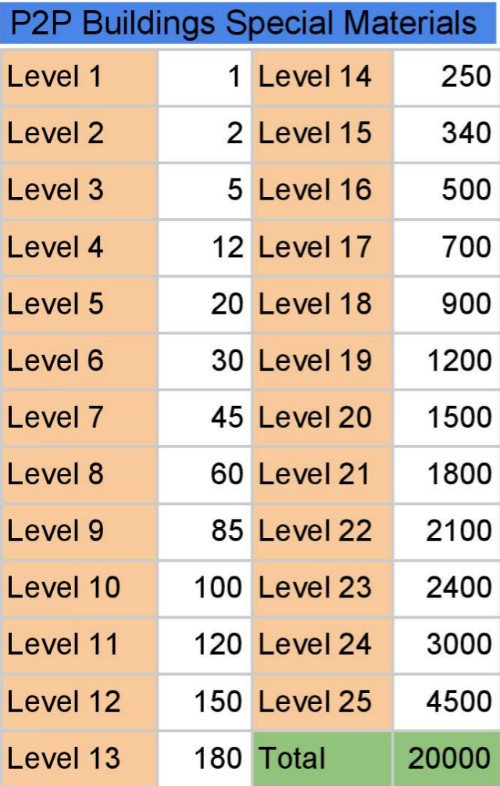 So this little graph shows how much of the special resources, for the p2p buildings, are required for each level. From level 1 to 25 requires 20k war tomes, soul crystals, and steel cuffs. That’s 60k special resources all together, at 10k gems for 1000 of each type of resource, that’s 600k gems from start to finish. But, that’s only if you purchase every single one, and we all know you get a good number of them for free just throughout your game play. Still, that’s a lot.

In spite of all of that listed above, I am glad I finally made the jump to castle 25. That fifth army right away was pretty sweet, and made gathering quests for guildfest so much easier. And, yes, all the level 25 buildings are going to be a challenge, but each level 25 building offers a boost that is definitely worth the struggle.

I am not saying NEVER go to castle level 25, I’m just saying don’t rush into it. Everything is going to take a lot of rss and patience, so there isn’t really any benefit to rushing it. In fact, you may be hurting yourself to rush c25 if everything else isn’t upgraded as high. It took me about 7 months of playing the game to finally move up to castle 25, and I am glad that I took that time. I don’t have to try to play catch up with all my other buildings because each level I waited to upgrade my castle until I had all the buildings leveled up as well.

Having said all of that, I know of several people that did rush castle level 25 and didn’t regret it at all. But my go-to lords mobile expert regretted rushing it, so I took his advice and held off as long as I possibly could. And for any new players, that would be my suggestion. Also, do as many watcher hell events as you can if you’re still below castle 25. Get him up as high as you can, because he gets a lot harder to get after c25.

If you have any other suggestions, or comments, let me know below! Thanks!! <3