First I should explain how I came to start playing the game in the first place. In a word, I was conned. Okay, I know that is three words but you get my point. The sole reason I started playing Lords was to get gems for another of the games I play. As you have probably already guessed, I never got the gems. Instead I got another game to add to the list of games I already played.

I have never enjoyed playing city building types of games, having found them to be too slow once you start to progress within the game. Lords is one of the fives games of this sort I now play. And quite possibly the most addictive. When I first started out I eventually joined a guild, sadly one which was very small and uncommunicative. After a very unproductive stint as guild leader I moved to a bigger, chattier guild. One with plenty of people willing to help the newbies. Shortly after that I got caught without a shield and most of my troops, and a large portion of my might, were wiped out.

Looking back my next action within the game sealed my fate. Did I get dis-illusioned and think of quitting? Clearly not. I actually set about replacing my troops and trying to learn from my mistakes. Learning from my mistakes is a rather large task as they still come thick and fast. As you can see from the picture below, I am progressing even if, compared to some of the people I have seen, I am still small-fry. 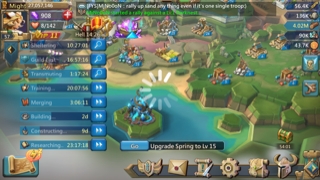 Before I started playing Lords, in a conversation with my teenage nephew, I explained )in the sort of detail that comes with being an old-timer) how I would never play a game like Lords as i am too impatient. As I am writing this first draft I have got my phone in clear view to monitor my troops who are gathering in a rival kingdom. In case you think I am making all this up see the picture below. 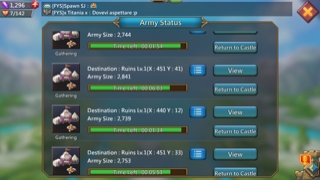 For this impatient old-timer the fact that I have set constructions going that initially take fifty plus days (50 DAYS, what was I thinking) seems almost unthinkable. But, am I really addicted to Lords Mobile? I think the clues to answering that are in my first article 'Old-Timer Gamer'. They are simply this. First, I really am addicted to gaming in general. Second, as an old-timer I am too bloody-minded to give up on a game that has already taken up so much of my time, not to mention money.

Next time, hard-learned lessons for the game and how I came by them