Guild is a group of players united that can help each other, joining a guild increases your progress because you can get help from your guild mates even with constructions, resources or with researches.If you spent a lot of time in playing Lords Mobile, maybe you will have a chance to be a leader in a guild. This guide (written by XNightingale) will tell you how to manage a guild. 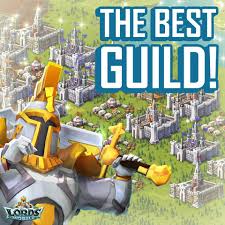 Whether it is setting up an orderly system of command and power inside
of a guild, deciding where to make a hive, or just making sure your
guild mates are progressing efficiently with the best knowledge; here
are a couple things you might want to know…

1. Systems of Power and Rank Management – If I ever start a guild or
make it my pleasure to advise the leader of the guild, I usually have an
organized ranking system of guild members set into place. As you may
know, guild ranks go from 1 (the lowest) to 5 (the highest) This 1). I
have set up a general system of hierarchy that I would use for a guild.

Rank V Guild Master/High Commander –  Sets policies and promotes members.
Rank IV Officers/Chiefs/Co-leaders  –  Senior members and officers in
training. Among these will be the Chief Diplomacy Officer and Chief
Warmaster.

Chief Diplomacy Officer – Negotiates truces via diplomacy boards and PM with other clans.

Rank III -Senior Members of high activity and might.  This is the general rank of sociable and trustworthy members.
Rank II – These are members who have been proven trust worthy of the
clan but are either newer members or have not hit a good amount of
might; these members also have less association with the higher ranks.
Rank I- New member/recruit. These members have things to learn and will eventually traverse into the second rank.

2. Hive Location – Next, I will discuss where it is a good idea to make
hives. If you are unaware, a hive is a certain area where large amounts
of guild members gather and transfer in order to make reinforcing,
trading, and protection easier; it also helps with the organization and
use of military and war tactics.

So how I find a good hive location is simple. I look for an area
around the kingdom for a space large enough for your guild to settle;
try to find one that is relatively vacant with no other guilds
immediately surrounding you and also that has resource plots. (You might
want help finding this) If you can, also consider moving close to the
wonder forest that envelopes a fort or base. If that is not possible,
simply find a good area like previously mentioned.

3. Guild Progression – Probably the most vital factor in a guild it its
level of progression, this means how much each individual is gaining
strength over time. You want to keep your progression high so that you
are not outdone by other guilds, but that is easier said than done.
There are several ways you can induce high progression into your guild
though, the main examples would be helping, trading, and
protecting/reinforcing.

Each of those three examples are broken down like this:

Helping – Make sure every member of the guild is giving their
share of help through the help buttons in the guild interface, it really
helps people speed up their constructing, research, etc.

Trading – Simple. Ask if anyone needs any resources, if they say yes, then send them some resources if you have any to spare.

Protecting/Reinforcing
– Also simple. If somebody is like "Hey, I'm under attack." then try to
send them some help,  or protect them from further damage by rally
attacking that specific foe.