Infirmary will be our main topic today because I'm inspired by a victim I recently soloed and zeroed. Let's take a look.. 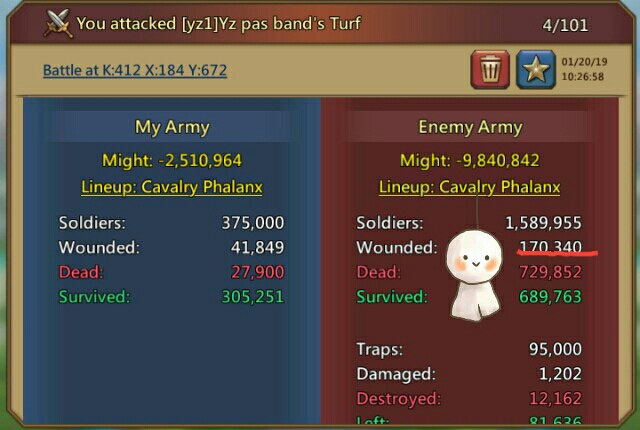 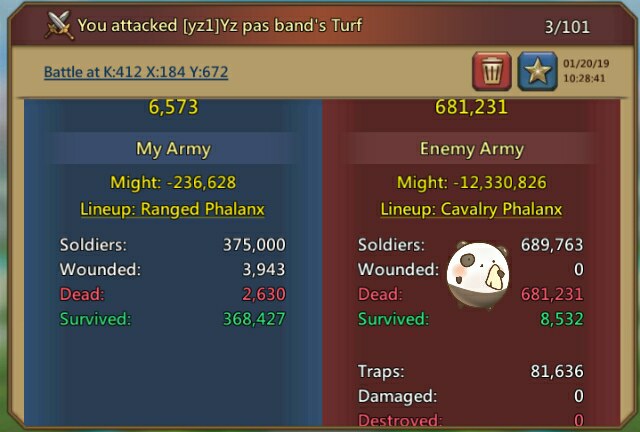 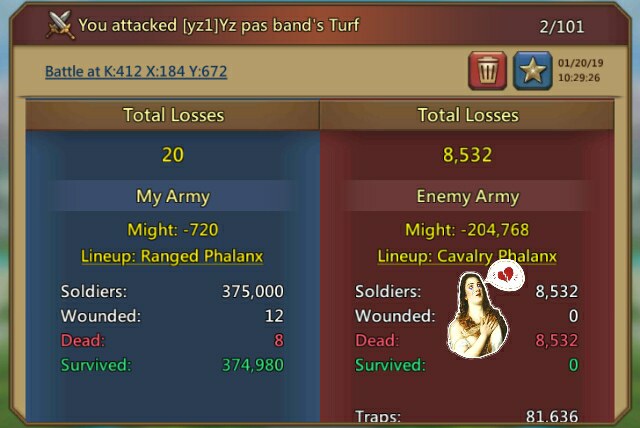 As you can see, the target had 1.5m troops but unfortunately, his infirmary capacity can only hold around 170K wounded troops. That's a waste of troops on his side and free kills for me (I should really thank him).

It costs less for you to heal wounded troops than it does to build new ones. When troops die, they die forever. You lose the might. You lose everything you've invested in them – be it resources, time, or gems.

Of course we are playing a war game and troops are going to die. It is part of the game. But it would be really a waste of resources and time if you get zeroed because of your own ignorance. There is always some ways to minimise the loss. One of them is to focus on optimalising your infirmary.

☆
When Do Troops Go to the Infirmary?

100% of your troops will go to the Infirmary if you are:

60% of your troops* will go to the Infirmary if you are:

• In a Skirmish unlocking areas inside your Turf
• Attacking an enemy. This includes, but is not limited to, solo attacking a castle, camp, gathering tile, or Wonder (The Base or one of the 6 Forts) as well as joining a rally on an enemy or Wonder.

*UNLESS
your Infirmary is full. If you are doing any of these things and your infirmary is filled to capacity, your troops will die.

☆
When Do Troops Get Killed?(@!!@)40% of your troops will die if you are:(@!!@)
• In a Skirmish unlocking areas inside your Turf
• Attacking an enemy. This includes solo attacking a castle, camp, gathering tile, or Wonder as well as joining a rally on an enemy or Wonder.

• You do not have any room left in your Infirmary

☆
How Many Infirmary Should Be Built?

Depending on your play time, infirmary can also be set up altogether with other buildings. I will take you through the 2 most popular set up.

I recommend this set up to players who are new/developing their base as it offers a bit enough infirmary space to cover your troops, alot of training speed to keep a good inflow of troops and 1 barrack is all you need as you can only create 1 certain troop at a time.

With this set-up you can also substitute 5 more manors to make 5 more infirmaries to hold more number of beds into the infirmaries. With 10 infirmaries, you can save upto 500k + whatever your shelter. This is a very good base set-up to have from middle to late game.

Go to Army Leadership Research and croll down to Bigger Infirmary research. 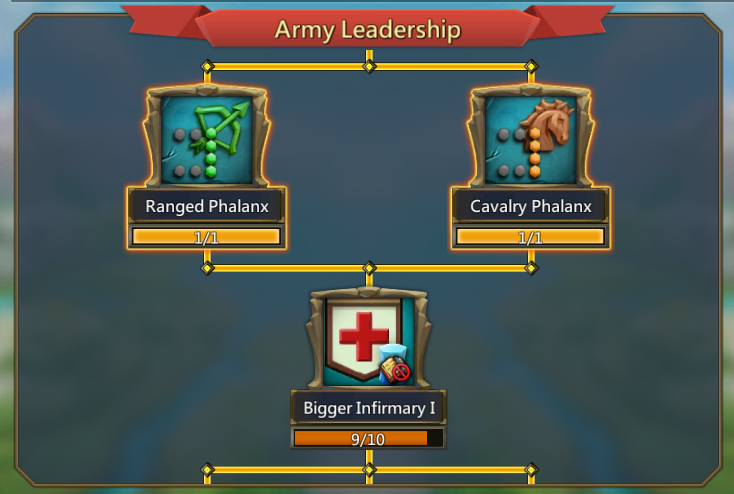 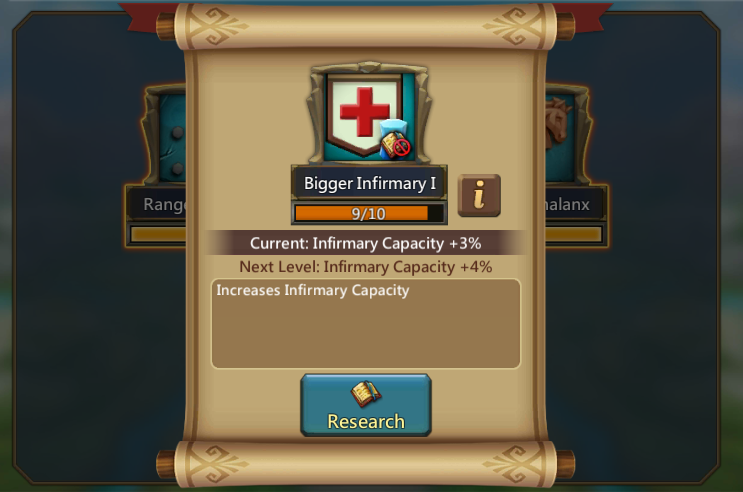 Don't forget to upgrade Familiars. They can be extra help.
Strix
(located in Pact 2A) adds to healing speed. Fully upgraded (maxed out), she can add 25% boost in healing speed. Every little bit counts. 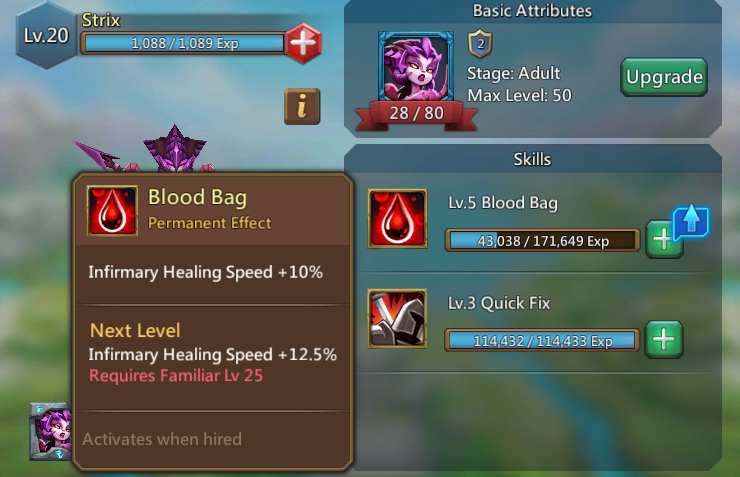 Harpy
is another familiar that is very useful. She adds to your shelter capacity. Fully upgraded she can add an extra 50,000 troops to be sheltered. 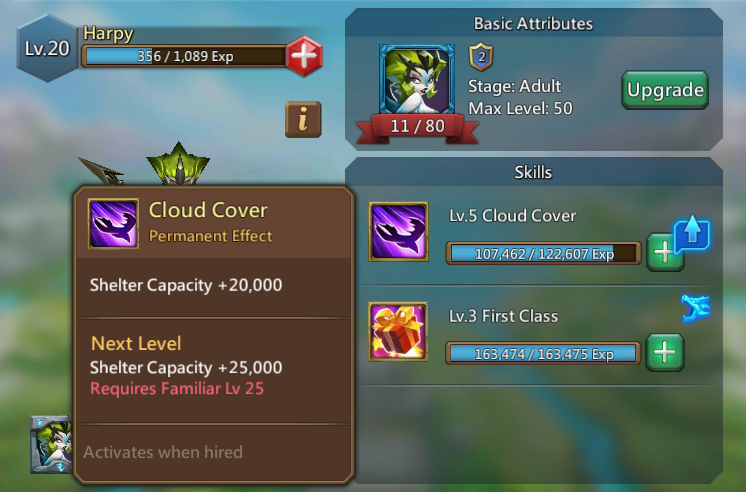 Don't ever train an army unless you have enough infirmaries to back them up. Why? Because if you get attacked your troops will die instead of going to the hospital. They will be dead. Dead troops don't recover. Because they are dead. And dead is dead.

That's it! Hopefully this post is helpful and informative. Happy gaming and always play smart!
(salute/)(cheers/)(rose/)