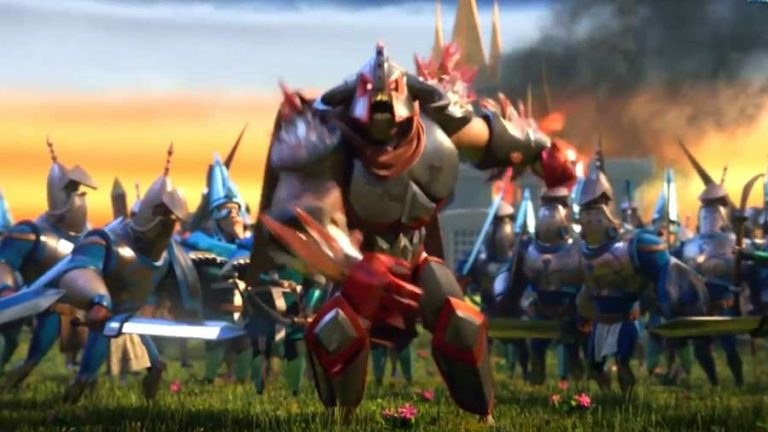 As mentioned, your gear will be your most important asset towards almost any task in Lords Mobile. Yes, killing enemy troops is also a task. A fun task, but still a task.
Attacking an enemy while wearing your construction gear, is like fighting a dragon wearing your Superman underwear. Just because your blue undies looks fierce in the mirror, doesn’t mean that you won’t get fried to a crisp.
The correct equipment will multiply the force of anything that you’re doing by x100. Don’t be stupid. Use your equipment properly.
Expert Tip: it is important to remember that your enemy will check likely inspect your equipment before even sending scouts. Effective gear (even research gear) will very quickly deter anyone from getting close. Anyone with good gear will usually have a powerful army hiding behind the castle walls.
Does my Gear have to Stay On? 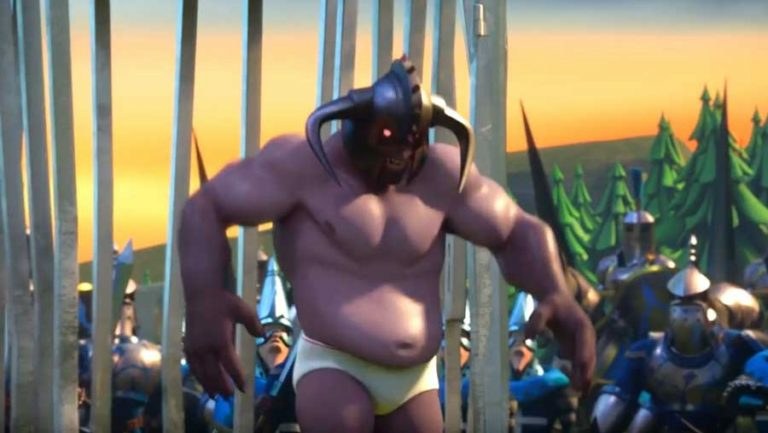 This question is also part of my most important Lords Mobile tips!
The answer is no. Once a task has officially started, you can then remove the gear and the stats will continue to reflect the original gear-driven boost.
For example, if you put on your resource collecting gear, you will need to keep the gear on until the troops arrive at the Wood Tile. Once they begin collecting wood, you can put on your research gear and start a research. The troops will still get the resource boost.
You army gear only needs to be on while you are in actual battle. You don’t need battle gear while you are traveling.
Construction Gear
Construction speed with all yellow construction gear should give you a 167.5% boost just from the gear. This amount doesn’t include all the additional boosts from research, talents, jewels, heroes, and temporary percentage boosts.
Your best friend with be the Noceros Monster when it comes to building up the powerful construction helmet and armor. 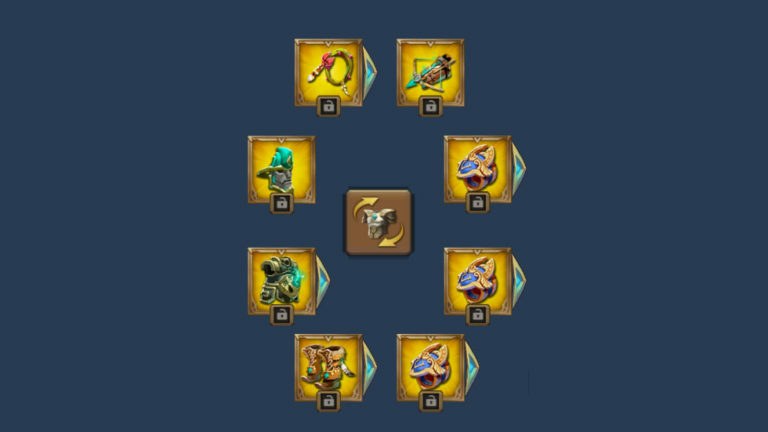 Accessory: Sentinel’s Circlet x 3
Off-hand: Gryphon’s Talon
Main-hand: Terror Lash (P2P from Big Guy is Sacred Broadsword)
Helmet: Noceros Mask
Armor: Lightning Guard
Legs: Gryphon Walkers
Research Gear
Research gear is extremely important, especially if you’re going for T4. Unless you want to hit T4 troops when your too old to slide your fingers across the screen, you’re going to need a lot of research boosts. The following arrangement is the best set-up to use for research and when level 60 and yellow will give you a 128.5% boost excluding all other in-game boosts.
Aside for battle gear, the research gear is the most important gear. The 128.5% boost will deduct months of time when researching the massive technology options in the Academy. 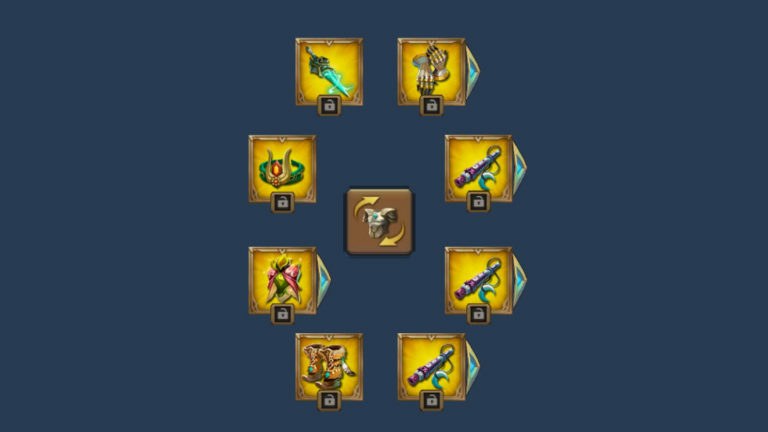 Accessory: Lunar Flute x 3
Off-hand: Vice Grips
Main-hand: Electric Lance
Helmet: Wyrmbone Coronet
Armor: Terror Shield
Legs: Gryphon Walkers
Resource Gathering Gear
Resources will help feed your armies, build your buildings and research, and most importantly inflate your already overstated ego. You will need a lot of resources to keep your ego afloat.
Only 3 of the F2P (free to play) gears will cater to the actual 65% boost of resource gathering. The other gear will boost army capacity and travel speed.
Ivory Chokers will give you an 18% travel speed.
Important Note: Don’t change this gear off until the army actually reaches the resource tile. If you switch the gears while the army is still traveling towards the tile you won’t get the boosts! 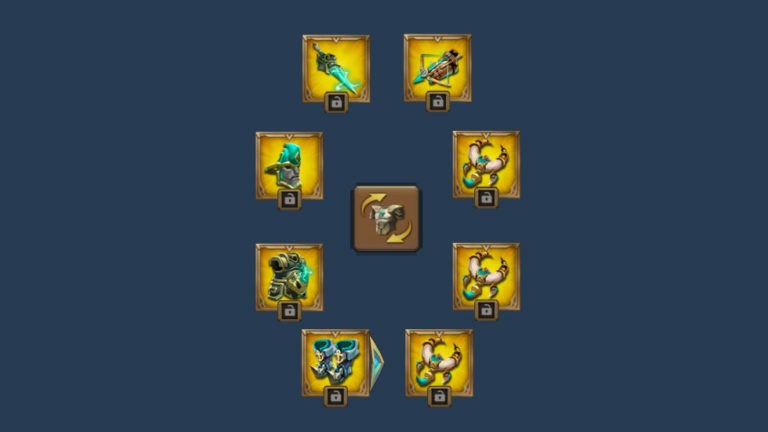 Accessory: Ivory Choker x 3
Off-hand: Gryphon’s Talon
Main-hand: Electric Lance
Helmet: Noceros Mask
Armor: Lightning Guard
Legs: Seafarers Cleats (Update: Now that the Craggy Greaves were released by Lords Mobile, they are the correct gear to wear.)
Familiar Training Gear
The new Familiars… No one is quite sure if they like these weird things. But they give boosts, so whatever… You may as well…
I know. That’s how I feel as well.
(Update: The Familiars aren’t too bad. Some are a waste of time. Most of them are fantastic. Here’s a guideon how to dominate your Familiars.)
Here is the best equipment layout to use before merging pacts or training the familiars. This setup will give a massive 218% Training EXP boost and a 150% Merging Speed Boost. Make sure to upgrade the Mystic Box as soon as possible. The 3 Mystic Boxes will give a 75% Merging boost and a 75% EXP boost. 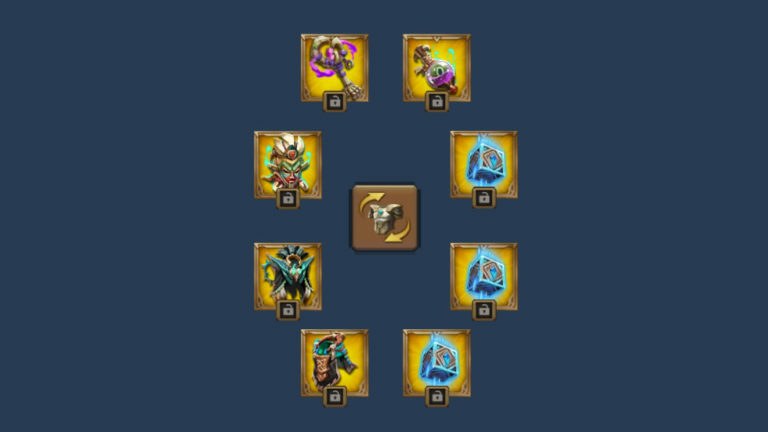 Accessory: Mystic Box x 3
Off-hand: Blighted Vial
Main-hand: Bone Staff
Helmet: Accursed Mask
Armor: Spirit Mantle
Legs: Ancestral Kilt
Gold Production Gear
Gold is the most important resource and when you are running low it can really put a standstill on everything. It’s hard to do anything without gold. Even scouting an enemy requires a little gold. Good news is that you can speed up your manor production! Here is the equipment layout. It will give you a 277.5% boost. 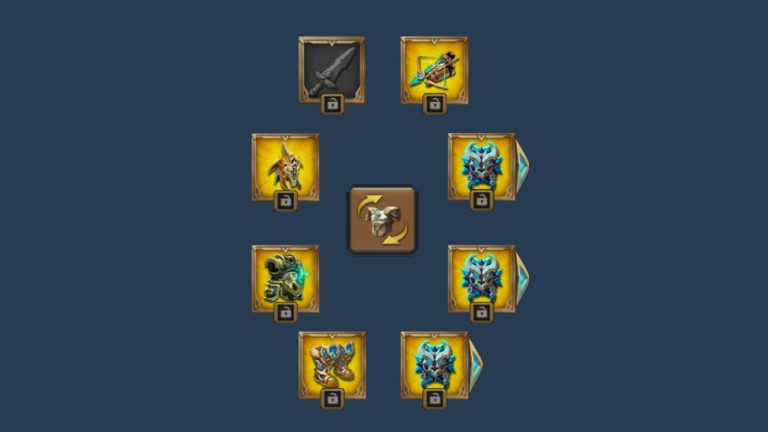 Accessory: Frostwing’s breath x 3
Off-hand: Gryphon’s Talon
Main-hand: N/A (there are no F2P gold production gear)
Helmet: Helmet of Conquest
Armor: Lightning Guard
Legs: Dwarven Toe Guard
Stone Production Gear
I always recommend an unbalanced resource production. Simply put, get more building of one type of resource than the others. Don’t get the same amount for each type of resource building.
My personal system favors stone over lumber and ore. I have 1 farm, 3 Lumber Mills, 3 Mines, and 10 Quarries. Basically, I like rock and roll.
There are only 4 gear units that will help stone production but they will give you a 155% boost when maxed. 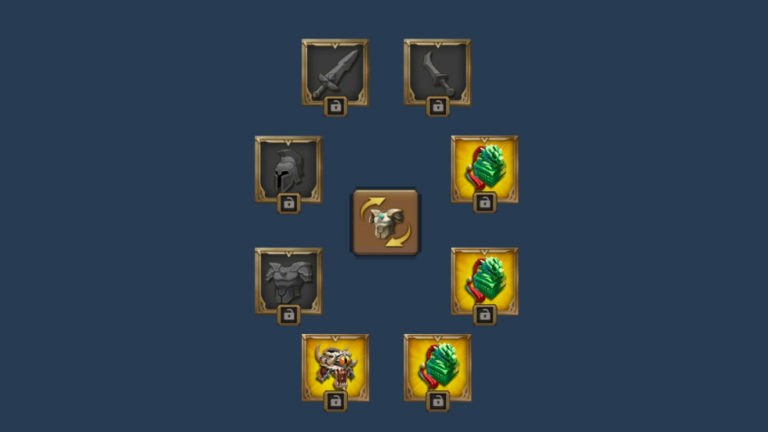 Accessory: Wyrm Seal x 3
Legs: Gargantuan Belt
Overall Battle Gear
Some people are just lazy and aren’t interested in picking out sets of gears and then working on them… Or some players aren’t interested in the battle element of Lords Mobile and would like to have something ready, but don’t care too much about the details. Prepare the drumrolls. I’ve planned out my dream-team of battle gear for the lazy collector. This set of gear is as good as you can get if you want everything at the same time…
Expert Tip: You will never become an expert with this set. This set is too general to be truly effective. The more direct techniques listed in the sections below will really turn you into the killing machine you were born to become. 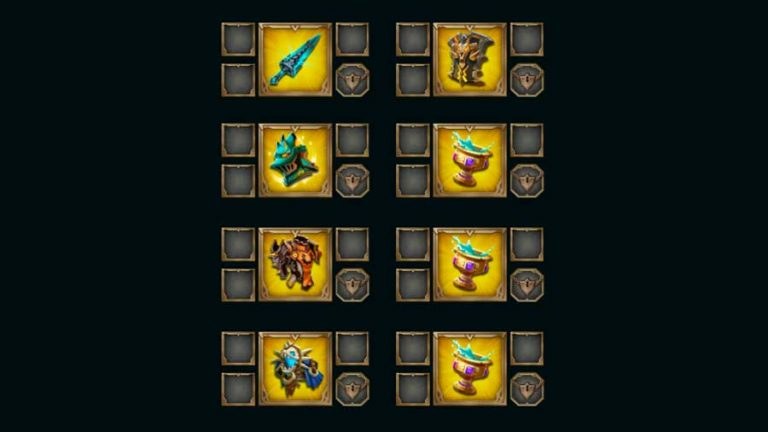 Alternatively, you can go for the Army Boost gear as shown below. This set will focus on just improving your overall Army ATK and Army HP. It will bring your Army ATK to 47% and your Army Max HP to 102%. I’m not a fan, but who asked me… 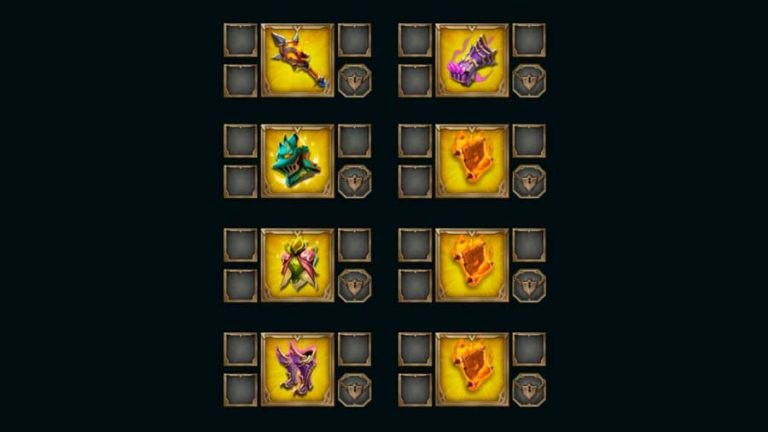 Expert Tip: The Burning Scroll Accessory from Hell Drider is a great idea to build alongside whatever strategy you end up using. The Army ATK and Army HP will assist you until your other accessories are ready for action!
Infantry Gear
To learn more about troop composition, go to my tutorial on Darknests. My preferred attack style is one troop attack. It’s more work because you will need to collect a lot more sets of gear, but the punch will be a lot more fierce. My recommendation would be to focus on one set of gear at a time and then slowly moving over to the others. Alternatively, you can skip these single style gear types and build “double-punch gear sets” instead.
I prefer to focus on both Infantry Max HP and Infantry ATK. I may lose a few points from my ATK but I will gain a stronger army in the long run.
The following gear setup (at gold) will give me an Infantry ATK of 210% and Max HP of 90% without including the gems. 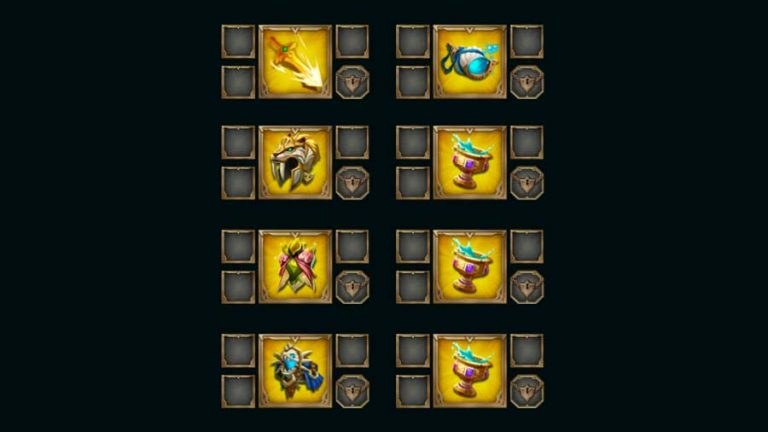 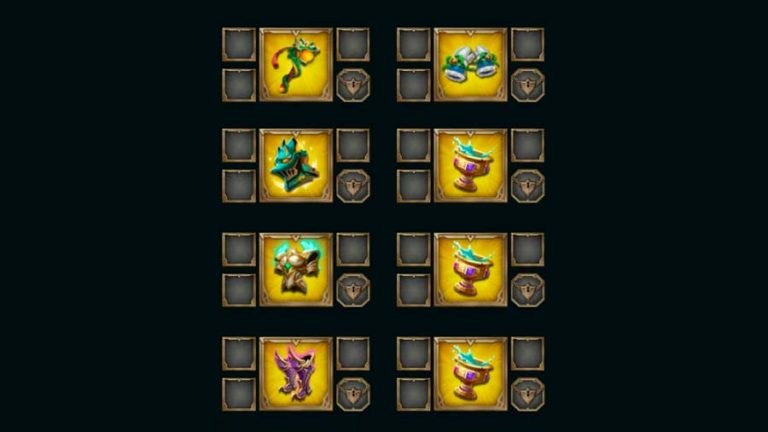 Accessory: Ambrosial Cup x 3 (Hard Difficulty from Bon Appeti)
Off-hand: Winter Mitts (Medium from Snow Beast)
Main-hand: Wyrm Rod (Hard from Jade Wrym)
Helmet: Bumblehelm (Hard Difficulty from Queen Bee)
Armor: Hedonic Cuirass (Hard from Bon Appeti)
Legs: Dragon’s Talons (Medium from Blackwing)
Cavalry Gear
Like the Infantry and range formations, the cavalry exclusive composition will carry a terrifying punch when in its advanced stages. Don’t forget to also change the troop formation.
With the gear shown below, the Cavalry ATK will be 193.5% and the Cavalry HP will be 79.5%. There are alternative gear choices that will give a higher Cavalry ATK (200.5%) but a much lower Cavalry HP (46.5%) and it is for that reason that I prefer the gear shown below.

image source google , and some tips from wegamer