However, each tier of troop takes up exactly the same amount of infirmary space….. and that is 1 bed per troop.  This is where the higher tiers come into their own, because having a full 400k T3 army would be the equivalent strength of 1.2m T1 army. You may be able to house your entire T3 army in infiramry beds, but only 1/3 of your T1 army.

An important point to remember is that if you have a mixture of tiers and get attacked multiple times, then your lower tiers will die first and take up the infirmary beds. This means the excess troops which are permanently killed will be made up of your highest tier troops.

You also need to know that in most circumstances your entire trap account will not be zeroed with a single solo attack (if it is, then something has gone seriously wrong!). The minimum number of beds you need is to cover a single solo hit. This means the lower the tier you go for, the higher the number of beds you need. Provided you have enough beds to survive that first hit, then you can shield and heal up your troops.

The number of troops you train is solely limited by the amount of might you gain. You need to keep your might low enough to encourage solo attacks on your base, otherwise you will end up becoming a rally target – which you really don’t want.

The might limit you set yourself will depend on the level of your trap account. As a rough guide the following provides a good number of troops with appropriate might for your Castle level:- 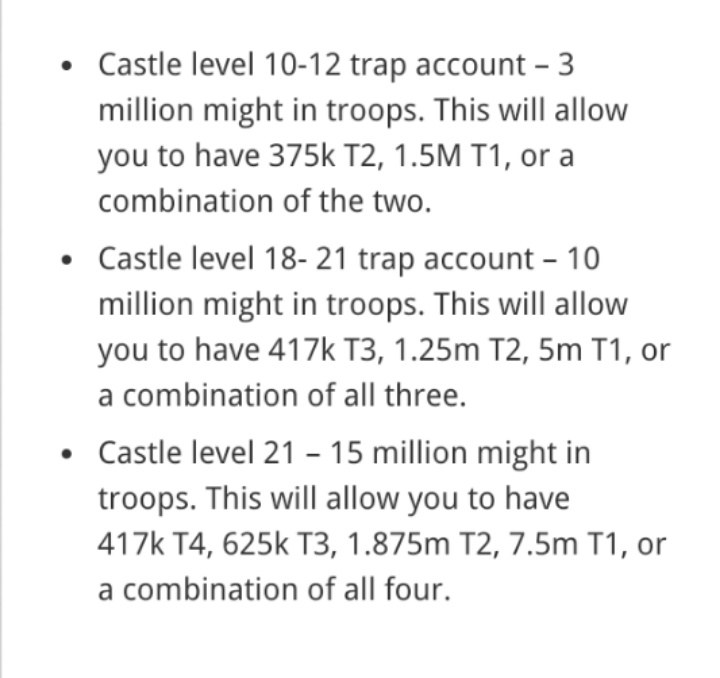 All of the above work well with what ever combination you decide, it really depends on the number of infirmaries you have and how carefully you use your account.

If you want the easiest trap account to play, then go for the highest tier troops you can train, with infirmaries covering all your troops (this is also the longest and most expensive route). You can then sit back in the knowledge that you will never have a single troop killed.

If you want to play a more active role with your trap account, then with more careful use of shields you can make a significantly cheaper and faster build by going for a pure T1 account. It will also be much cheaper and quicker to heal your troops after an attack.