You can skip the econcomy tree completely as there are no abilties that benefit an end game trap account. However you may want to research construction speed to help speed up your progress.

Max the whole military tree except for siege skills. Everything else in the military tree will increase the strength of your troops and you will need all varieties of troop types in your trap account.

This includes the troop attack abilities, which do come into play even when defending.

Like the combat tree you want to max as much of the defense tree as you can. This means unlocking the higer tier traps and all the wall strenght abilities.

You can skip this tree entirely. There are no useful abilities in the Monster Hunt tree for a trap account period.

Upgrade Defenses is another good solid research tree for a trap account build. Go for as much as you can in the upgrade defenses tree.

This is a tough one. You can skip this tree, but there are a couple of very useful abilities. The first is Quick Swap, which unfortunately is quite far down. This ability lets you swap out leader equipment sets. The reason this is so useful is that a great trap tactic is to sit in your farming gear so that when a player checks you out they think you are either offline or farming. Just before they hit your turf you quickly swap gear to your best combat set.

If you don’t train Quick Swap you have to manually change every single equipment slot!

The second useful ability is Field Triage which increases your infirmary healing speed. Not essential, but again it does mean you will use less speed ups to heal your troops after an attack.

The rest of the tree is useless for a trap account.

Bigger Infirmary is a must have. Army Defense II, Army Offense II and Army Health II are obviosuly all very useful. However, the best three abilties in this tree for a trap acccount are Sabotage, Plague and Demoralize. Maxing all three will reduce your opponents whole armies attack, health and defense by 10%.

A 10% debuff to an opponent is signifnicnantly more powerful than increasing your own army’s stats by 10%.

I suggest leaving this tree to last becasue it is a significant investment in time, resources and a large chunk of extra might added to your trap account to get those final abilties.

Traps are easier to set up than troops, as there are less decisions to make. This is because you are always going to be restricted on the number of traps you can build, based on your wall capacity.

You want to fill your walls with an even mix of Tier 3 or Tier 4 traps, depending on which you have unlocked. Make sure you build equal numbers of each trap type to protect yourself against all possible attacks.

With your army size you should not lose too many traps. Plus with trap retrieval research maxed you will be able to repair 50% of your wall traps which are destoryed.

The most important part of your trap account in Lords Mobile will be your troops. You need to know which tier, which type and how many to train.

Troop type is probably the easiest to answer. Generally when you are attacking a player, it is better to only send a single troop type i.e. all infantry, cavalry or ranged. This is because you can stack a single troop’s stats by concentrating on specific leader skills and gear. However, the opposite is true when defending.

As you do not know what type of troops are going to attack you, generally you want an even balance of infantry, cavalry or ranged. The only troops you do not want to train are siege engines, as these are only useful for taking out wall traps during attacks, which you won’t be doing.

A lot of different combinations of troop tiers work well for trap accounts, there is no single best setup to use.  Used correctly a full T1 army with the same might as an equivalent T3 army, can be just as effective. A combination of tiers can also make good trap accounts.

Depending on the level of the trap you have built, you will be limited to T3 or T4 troops. This will be the overall limiting factor when you decide which combination of tiers to train. 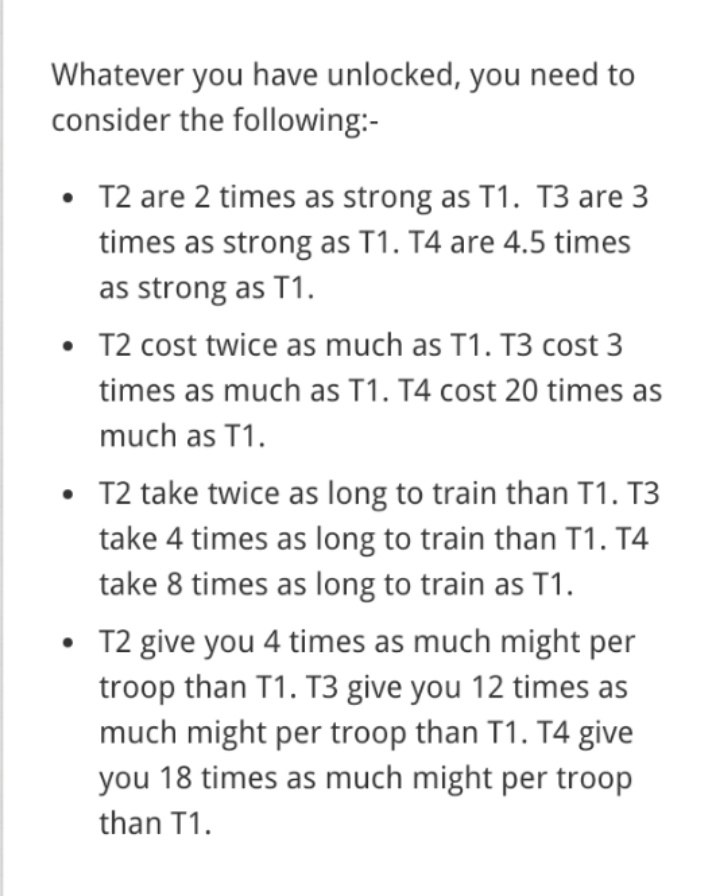 Remember that a key point of a trap account is keeping your might as low as possible and this is really important with troops.

From the above you can see that the cheapest and quickest option is to train a pure T1 army. They also benefit from zero healing time in the infirmary.